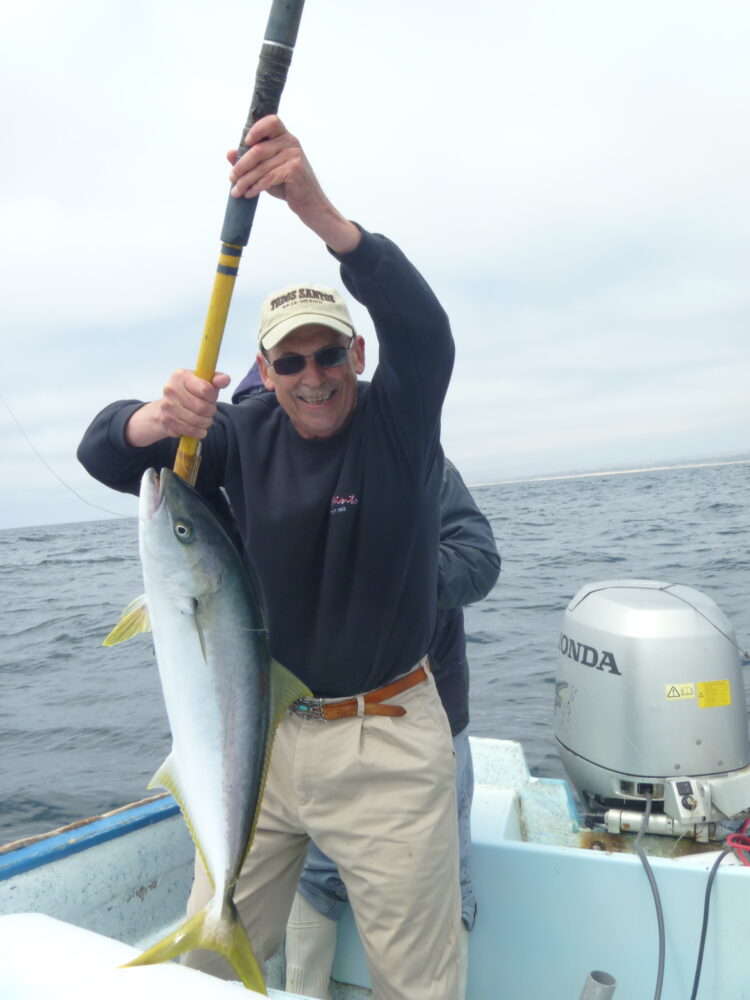 There was no dock and no fancy yacht. The tackle was old and weather-beaten. But this was real fishing, not a tourist trip from a resort. We were fishing with fourth-generation professionals off the Pacific coast of Baja California Sur at the town of Todos Santos.

I was joined by Chef Dany Lamote of the Hotel California, an avid fisherman like myself, his son Sebastian, and Jud Blaine, a chile grower. We had a captain and a pilot aboard our 22-foot, wide-beam ponga boat that launched from the beach using a line to a puller-ponga already in the water. It was cool and cloudy on that March day, with frigate birds cruising above us, sea lions on the rocky cliffs, pelicans diving, and unknown fish in the depths below.

We were trolling with large, jointed Rapala lures when Dany got the first strike—and a good one. His rod bent severely and line streamed out as the fish made a run. Dany had done this many times, so after about a seven-minute fight the pilot gaffed the fish, which turned out to be a 12-pound grouper. I had always fished for grouper by anchoring near a reef and sending down a baited hook, but when they’re hungry enough, they will leave the rocks swim upward, and take a lure.

The captain was only part of the action when we were landing a fish; otherwise, he was searching the ocean for jumping fish that were hunting bait fish, and scanning the skies for pelicans, gulls, and terns diving or skimming the ocean the fish.

We caught one more grouper and then tied into a school of yellowtails, which are really jacks and closely related to amberjacks. People confuse them with yellow-tailed snapper and yellowfin tuna, but these yellowtail are the same prized fish that are sushi bar favorites called hamachi. Soon, everyone had a fish except for me, and it was time to head back to the beach. But on the way, the captain pointed, the pilot made a sharp turn to starboard, and we soon tangled with another school and I had my fish, a 16-pound yellowtail that took nearly fifteen minutes to land.

The return was dramatic. Like a surfer (and there are plenty of them off nearby beaches) the captain waited near the shore for the perfect wave, and then we rode it in going about 20 knots, to a perfect, gliding landing on the beach. We hopped Pulling the Pongaout, and a truck came down to pull the boat up the beach and beyond the tide line.

Grilled GrouperDany instructed the captain about the fish, and soon 33-pounds of clean fillets were delivered to Dany’s new restaurant, Santo Vino. In a matter of minutes, Dany had invited 18 lucky people to a private fish feast that evening and served fish that were only five or six hours out of the ocean. The first course was Mexican Sashimi (my name), and I’m never seen so much raw fish devoured so quickly. That was soon followed by grilled grouper topped with a savory sauce. The wine flowed, the conversations were animated, and it was the perfect end to a truly wonderful day of fishing.

I watched Chef Dany prepare the sashimi, and I’ve attempted to reconstruct here, but it probably isn’t exact. No matter, it will be delicious if you pick the freshest fish you can find!

Place the fillets on a serving plate. In a bowl, combine all the remaining ingredients and mix well. With your fingers, drop the bowl ingredients over the fillets and serve immediately.
Yield: 6 to 8 servings
Heat: Mild to medium.