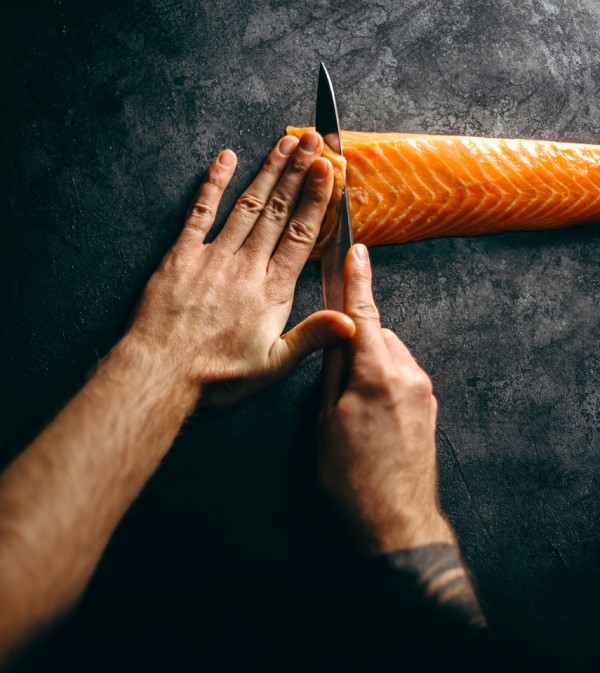 Processed salmon—both smoked and cured—comes in many often confusing forms. But it’s our job here at Seafood Harvest to unconfuse you, so keep these definitions in mind the next time you see one of these forms for sale.

Gravlax. This Swedish specialty is raw salmon that is cured in a salt-sugar-herb mixture, and the herb is usually dill or parsley or both. Sometimes dried, ground oregano is added to the mixture. After curing for three to five days, it is sliced extremely thin and is served on dark bread, often open-faced with a mustard or horseradish sauce. It is usually not smoked, but don’t let that stop you from experimenting.

Indian-Cured Salmon is brined and then cold-smoked (70-90 degrees F.) for up to two weeks, and the result in a type of salmon jerky.

Kippered Salmon. This is a U.S-style salmon steak or chunks that are brined and hot-smoked (120-180 degrees F.) So, essentially it is cooked salmon. Often, the salmon used is chinook, which is treated with bright red food coloring. European-style kippered salmon uses a split whole fish which is brined and then cold-smoked. The name comes from British kippers, which are split herring that are gutted, salted or pickled, and cold-smoked.

Lox. Very thin salmon fillets are brined and lightly cold-smoked. It is a favorite Jewish-American breakfast dish when served on a bagel with cream cheese and raw minced onion.

Nova, named after Nova Scotia, is similar to lox, but is not brined before being lightly cold-smoked. It, too, is often served on a cream cheese-schmeered bagel.

Photo by cottonbro from Pexels