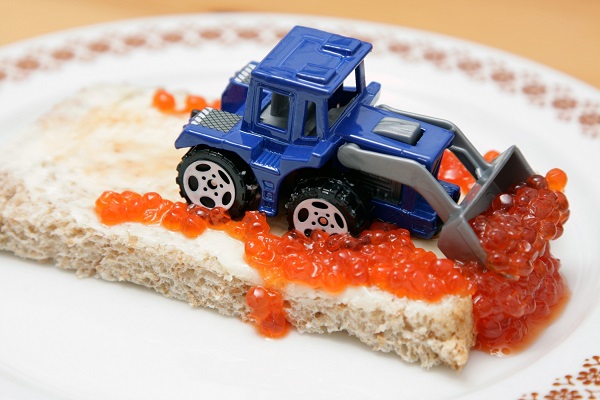 Not that much has been written about the lesser-known non-fish roemakers. I’ve learned that crab roe is an essential ingredient in Chinese She-Crab Soup and that since Shrimp roe is carried externally by shrimp, it is often served that way to diners, who ask their servers, “What are all these black specks on my shrimp?” They are then assured that the roe makes the shrimp even more flavorful. Scallop roe is loved in France but is discarded in the U.S, because the scallops harvested here are not as flavorful. So far, the only use I’ve found for it is to enhance the flavor of the scallops themselves in various recipes.

And squid roe, or “squid babies” is a delicacy served in Thailand and Malaysia and seemingly nowhere else. Blogger Claire Handleman writes, “Squid roe is like the veal of the sea. The sacs of eggs are creamy and tender, never developing into snappy adults with the characteristic rubber band texture (if cooked improperly). Whether pan fried or grilled, squid roe is rich and buttery, and more delicious than a fully realized squid.” [Handleman, online.]

We know about cuttlefish roe because of blogger Sean Chen and his “Way of Eating” Chinese blog. “Cuttlefish roe is very tasty but also rather difficult to prepare,” he writes. “One needs to thoroughly boil it using river water to remove any sand and rid it of its stench. After that it must be simmered with chicken broth and mushrooms until tender. This is all well and good, Sean, but where can we buy it? [Chen, online.]

And we know a lot more about sea urchin roe than the roe of all the other non-fish roe-makers. Why? Because its probably the most important roe of all in world cuisines, including caviar. But why is this creature called a Sea Urchin? We consulted with The Word Detective to find out. 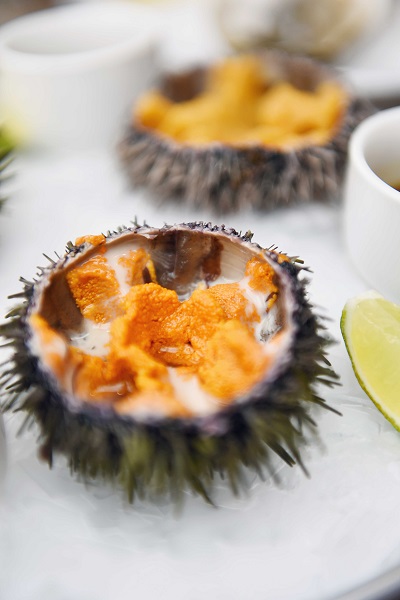 “Urchin” first appeared in English in the late 13th century with the spelling “irchin” (followed shortly thereafter by “hurcheon” and other variants).  The word had been filtered through several other European languages, but the root of all the forms was the Latin “ericius,” which meant “hedgehog.” They are small, spiny mammals covered with quills, which they use to defend themselves when threatened by rolling themselves into a tight ball so the quills point outward. The first use of “urchin” in English was to mean, logically, “hedgehog,” but soon the word was also applied to people with “prickly” personalities. Those spiny sea urchins have been so called since the early 17th century.  The use of “urchin” to mean “small child” or “infant” appeared in the 16th century, but it wasn’t until the 18th century that our modern sense of “poor street child” became the dominant usage. [Morris, Evan and Kathy Wollard. “Urchin.” The Word Detective, online.]

The reproductive organs of both male and female sea urchins, usually called sea urchin roe or corals, are culinary delicacies in many parts of the world. Jane Zatylny, an editor and writer based in Victoria, British Columbia described her first experience with sea urchin roe: “I sat at a sushi bar in San Francisco, California, staring at the chef’s display of tuna, salmon, red snapper, scallops, and eel, when something unfamiliar caught my eye: a wooden box filled with what looked like small, yellow-orange fillets. “What are they?” I asked the chef. “Uni,” he replied, using the Japanese name for sea urchin meat. “Try one. They’re really special.” A few minutes later, he placed a piece of nigiri topped with urchin flesh in front of me and watched me take a cautious bite. I adored that first hit of brine on my tongue, followed by the uni’s rich, sweet taste. And that was it; I was hooked on urchin before I even realized I was eating its reproductive organs.” [Zatylny, online.]

Zatylny notes that green urchins are known for their small, sweet-tasting gonads, while giant red sea urchins offer larger, firmer meat. “There’s no crystal ball to tell chefs how good the gonads are in any given shipment,” she writes. “Just as terroir imparts a signature flavor to wines, gonad quality depends on a variety of factors, including ‘merroir,’ the watery environment where sea urchins mature. And just like wine, the only true way to test quality and flavor is to open a sea urchin and taste it.” [Ibid.]

And that’s precisely what Euell Gibbons, America’s foremost forager, did back in 1964. He writes in Stalking the Blue-Eyed Scallop, “The Sea Urchin has no flesh that I can discover, so only the roe, or gonads, are eaten, and they taste even more delicious and delicate than the finest caviar.” He passed the urchin eggs through a sieve to remove the membrane of the egg sacs, then whipped the strained roe with a power hand mixer and the roe became thick and spreadable and turned a lemon-yellow color. “Eaten on small, round crackers or bits of toasted French bread,” he wrote, “this Urchin butter will make caviar taste like very common fodder.” And Gibbons suggested another reason to eat urchin eggs, “their great reputation as an aphrodisiac.” But he goes on to note that the roe works no better than any other reputed aphrodisiac, and that’s not at all. He intimates that instead of performing in the bedroom, “Its joys are those of the dining room.” [Gibbons, 130, 134.]

Sea urchin roe has many uses throughout the world. In Mediterranean cuisines, it is often eaten raw, or with lemon and is sometimes used in pasta sauces. It can also flavor omelettes, scrambled eggs, fish soup, mayonnaise, béchamel sauce, or Hollandaise sauce. In Chile, it is served raw with lemon, onions, and olive oil. In Japan, sea urchin is known as uni, and its roe can retail for as much as $360 per kilo. It is served raw as sashimi or in sushi, with soy sauce and wasabi. Japan imports large quantities from the United States, South Korea, and other producers. Japanese demand for sea urchins has raised concerns about overfishing. In 2015, sea urchins were harvested in six states: Florida (27 metric tons), Washington (326 mt), Oregon (203 mt), California (3,677 mt), Maine (805 mt), and Massachusetts (23 mt). [Sonu, Sunee C. “Sea urchin supply, demand, and market of Japan,” online; Anon. “Sea Urchin,” online. ]

Jane Zatylny states, “The Japanese have by far the biggest appetites for sea urchins, consuming 80 to 90 percent of global supply. The country’s annual demand has been estimated at about 50,000 metric tons, but due to declines in its own fishery, only about 8,000 to 10,000 tonnes are caught domestically.” [Anon. “Sea Urchin.” Online; Zatylny, Jane. “Searchin’ for Urchin,” online]

However, the figure of 50,000 metric tons appears to be an exaggeration. Data from NOAA indicates that “In 2016, Japan imported about 11,000 metric tons (mt) of live sea urchins and sea urchin roe valued at about 183 million dollars, an increase of more than six-fold in volume and 9-fold in value from 1975.” If this figure is added to Japan’s typical domestic production of 10,000 metric tones, then Japan’s demand is less than half of the 50,000 metric ton estimate. Still, the production of sea urchin roe appears to be the largest roe industry in the world, far surpassing that of caviar, which in 2017 amounted to approximately a mere 364 tons. [Sonu, Sunee C. “Sea urchin supply, demand, and market of Japan,” online; Directorate-General for Maritime Affairs and Fisheries, “The caviar market,” online.]