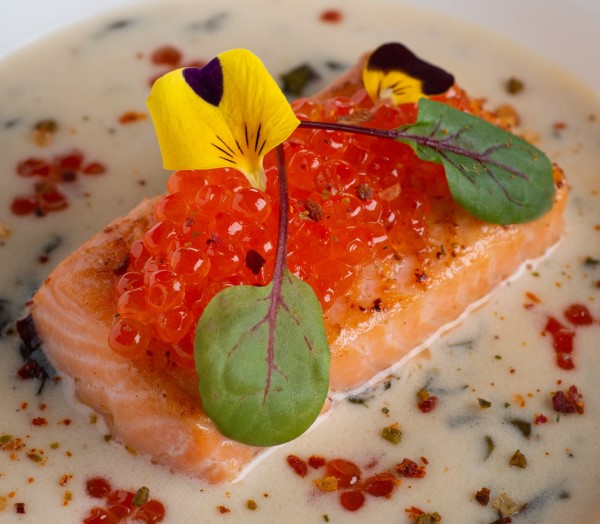 Salmon has the only roe that I know of that’s also used as a bait for catching other fish. Salmon Eggs, the marketing term for bait roe, are one of the best trout baits, but other fish will take the bait because they like the scent of salmon eggs, including salmon, bluegill, steelhead, bass, catfish, and sucker fish (but no real fisherman fishes for suckers). Terry Minton, seemingly an expert on using salmon eggs as bait, warns: “I do want to point out that salmon roe prepared for food is NOT the same thing as same as salmon eggs for fishing, so please do not go to your tackle box and start eating out of the jar. These two things are prepared differently, and sometimes extra scent is added to the fishing bait which would not be good for us humans. It might not kill you, but it is not going to taste the same and might make you not feel well.” [Minton, online.]

The earliest process for turning salmon roe into human food was the Japanese sujiko, layering roe in skeins on straw mats to salt them, like black sturgeon caviar. That simple technique was not very appealing to their customers, the Russians, so around the turn of the twentieth century, Russian ikryanshiki (caviar makers) turned the tables on the Japanese and started producing grained salmon caviar; before salting, the caviar was separated from the skein and rubbed through fine netting called grohot. The Japanese loved the new method because of the salmon caviar’s superior appearance and taste and Japanese entrepreneurs learned this new method of caviar making and called it ikura, a word that echoes the Russian word for caviar, ikra. The Russians loved the new ikura too, making it a powerful competitor to the rare and expensive black sturgeon caviar.

Salmon caviar, now mostly imported from Japan, became known as “red caviar” in the time of the Soviet Union. In this case “red,” Soviet Russia’s favorite color, referred to the caviar’s color to better distinguish it from black sturgeon caviar. Black and red caviar were both in high demand but very difficult to acquire unless one had black market connections. It was the height of culinary fashion to have both black and red caviar sandwiches on the table in the 1970s and 80s in Russia. [Awers, Inc., online]

But beginning in the 1960s, a lack of salmon roe caused the Japanese caviar makers to turn to a better source of the product: Alaska. At first, roe from wild-caught salmon was considered to be an almost worthless byproduct that was mostly discarded with offal. In 1964, the production of salmon eggs for bait totaled about 1.5 million pounds with a wholesale value of more than $300,000. Salmon roe for caviar production was more than 850,000 pounds with a wholesale value of about $750,000. That would soon change radically because Japanese companies invested heavily in roe production in Alaska starting in the 1965 season when they paid canneries nine cents a pound and ordered 2.2 million pound of roe. That was the beginning of the Alaskan salmon caviar roe industry. [Anon., “Salmon Caviar Industry,” online.]

The Cooperative Extension Service of the University of Alaska Fairbanks describes the different salmon roes used to make caviar: “The roe from any of Alaska’s five species of salmon can be used for salmon roe caviar, each with a characteristic egg size, color, and flavor. Chum salmon eggs produce large, pale, reddish-orange caviar. Coho and king salmon also yield large, red-pink, mild-flavored eggs. Pink salmon eggs are orange, slightly smaller and with a flavor de­scribed as a mild and sweet. Sockeye salmon eggs are the smallest — about half the size of chum eggs and bright red. In contrast to pink salmon roe, the flavor of sockeye salmon caviar is described as slightly bitter.” [Anon., “Salmon Roe Caviar.”]

Back in 2003, New York Times writer Julia Moskin was curious about what Russian Americans thought of Alaska salmon roe and caviar. She started asking around in New York City gourmet food circles, and twice was told, “You know, salmon caviar isn’t real caviar.” Undaunted, she visited Brighton Beach, Brooklyn, home to many Russian immigrants. There, Latvian-born Norman Chait said, “Here, as in Russia, putting out the red caviar, brown bread and vodka is like a universal sign of hospitality.” Over at Zabar’s, a longstanding gourmet deli on the Upper West Side, Saul Zabar, who has selected the caviar sold at Zabar’s for 50 years, told her, “if it’s been kept properly—at  about 31 degrees, and about 2 percent salinity—fresh salmon roe from the Pacific Northwest is better than beluga.” And it’s a lot less expensive. One cannot buy beluga caviar now, which has been banned in the U.S. since 2005 because the sturgeon of the same name is nearly extinct in the wild, but a similar product, Beluga Hybrid Caviar, now sells for $129 an ounce. Zabar’s offered Moskin six ounces of red salmon roe for $9.95. Sofia Vinokurov, an owner of M&I International Foods on Brighton Beach Avenue, said, “Caviar and blini with Champagne, that’s for the aristocrats; regular Russian people like good black bread with butter and salmon roe, and some nice vodka.” Moskin concluded,  “In Russia, for every privileged osetra [caviar] snob, there are a million lovers of lososevaya ikra, or salmon caviar.” She also reported that Mr. Chait’s philosophy of roe was, “The best caviar is the one you can afford to buy the most of.” [Moskin, online.]

In 2014, Christine Blank reported in Seafood Source, “Alaska salmon roe suppliers are in a major jam since Russia banned seafood imports from the U.S., the European Union, Canada, Norway and Australia on 6 August.” At the time, Russia and the Ukraine were the second biggest market for Alaskan salmon roe, behind Japan, which imported $125 million worth of the valuable fish eggs in 2013, according to National Marine Fisheries Service data. Alaska exported $60.4 million worth of salmon roe, or 8,561 metric tons, to Russia in 2013, along with a significant $68 million, or 17,000 metric tons, to the Ukraine the same year. However, the roe and caviar industry recovered. “In 2017, NOAA Fisheries reported, “Caviar and roe exports were 42,717 tons valued at $429.5 million.”  During the Russian embargo, which was still in place as of this writing, the U.S. did not impose any restrictions on Russian seafood imports, which increased from $320 million in 2014 to $551 million in 2018. So here’s how the Russians are celebrating their salmon caviar trade victory. [Blank, online; NOAA Fisheries, online; Anon., “Russian embargo brief,” online.]

Michael suggests that home cooks can make their own approximation of salmon caviar by using fresh or frozen chum salmon roe, soaking it in a light brine for a few hours, and then add flavorings such as ginger. The roe is then drained and refrigerated before serving.

Photo by Max Griss from Pexels