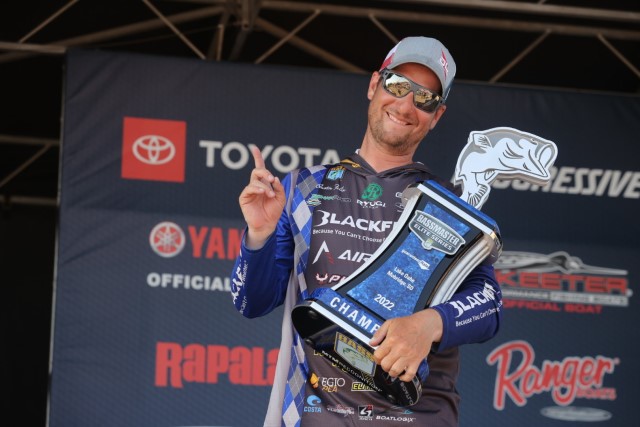 With a five-bass limit that weighed 16 pounds, 3 ounces on Championship Sunday, the Eden Prairie, Minn., native secured the victory at the Guarantee Rate Bassmaster Elite at Lake Oahe with a total of 71-9, earning $100,000.

Felix overcame a disappointing Day 1 performance of 14-2 that put him in 34th and then rebounded with the VMC Monster Bag of the tournament at 23-3 that lifted him to second place after Day 2 and earned him an additional $2,000. Felix took the lead on Day 3 with 18-1 and held off a hard-charging Chris Johnston on the final day.

“I feel like I have an advantage on a smallmouth event over the field, at least most of them,” the 2020 Bassmaster Rookie of the Year said. “It is my wheelhouse, I would like to think. I had never been here before but when I came here for (pre-practice) it was the most incredible fishing in the world.

“I fully expected driving out here that the 23-pound bag would be what you had to have to compete. But, when we got here, these fish have gotten a lot of pressure over the last year.”

On the Pointy End

While he had close to 18 spots marked, two main-lake points on Lake Oahe produced the bulk of Felix’s weight, one above the Highway 212 Bridge that crosses the lake south of takeoff in Mobridge and one below the bridge. These points had an important characteristic: they dropped off sharply into deeper water and had rockpiles on the bottom.

For the most part, Felix’s smallmouth were relating to the bottom or close to the bottom. If he found they were set up on the bottom, he could stay off his spots and cast to them. But on many occasions, they would be constantly on the move and that’s when his Lowrance Active Target came into play.

“The key is it had to have a really steep drop-off into the main river channel, and you wanted that break to be somewhere between 30 and 35 feet,” Felix explained. “I think they like to be over the open water and then they can slide up.

Getting into the Zone

“Their feeding zone was between 25 and 35 feet. Most of it had rocky patches on it. Sometimes they would settle on it. This afternoon there was a big group and all they did was swim around the point. They swam around the boat every 20 minutes.”

A Z-Man Big TRD on a 1/4- or 3/8-ounce Ned head was a key bait for Felix, as well as a Carolina-rigged Zoom Speed Craw with a 5/8-ounce Ryugi Carolina rig weight. The weight has a plastic sleeve in it that keeps the line from getting nicked up on the bottom.

Fishing around Lee Livesay keyed Felix in to the Carolina rig bite that helped produce the giant Day 2 bag that turned his tournament around.

“We sat there for three hours and would each catch one every 15 or 20 minutes. It was just one of those days. We were chatting and joking, it was the best day ever.”

On Sunday, Felix landed a smallie that was entered on BassTrakk as a 3-8 first thing in the morning and filled his limit on his starting spot. With his afternoon magic on Day 3 in mind, he waited as long as he could to run down the lake, and it paid off with three important catches late in the afternoon.

The bass he found there bit a Carolina rig on Semifinal Saturday, but he hunted them down with the Ned rig and Active Target Sunday.

“I figured out how to catch that group of fish way south and I caught three good ones yesterday and I left it with the idea I would come back,” Felix said. “All day I was sitting there (telling myself) I wasn’t going before noon. I bided my time.

“Fortunately, my starting hole paid off with a limit, which calmed me down a lot. At noon, I ran 25 miles south and I caught a good one really quick.”

After catching two smallmouth that bumped him up to the 16-pound range, Felix realized a blue trophy was within reach. But before he got too excited, he refocused by thinking about the next event on the Upper Mississippi River scheduled for next week.

“It really hasn’t hit me yet and the fact we have such a short turnaround before La Crosse, I was actually using that all day,” Felix said. “When I started thinking about winning or daydreaming, I clicked over and thought about what I had to do for La Crosse when this is over. I tried to keep my mind off of winning and on something else.

“But I’m sure when I am driving home, I’ll be screaming in the truck by myself going down the highway.”

Johnston recovered from a Day 3 stumble to finish second with a 68-6. The Canadian pro secured 18-15 on Day 1 before catching 18-13 on the second day to take the lead. But a disappointing 13-12 on Semifinal Saturday dropped him to third, and his comeback attempt on the final day fell just short.

“I didn’t think I was on the winning fish after practice, so to get second, I am still happy with it,” he said. “Obviously I’m a little disappointed. I had one or two missed opportunities today that would have made it a little more interesting. But still, it was a fun week fishing and catching smallmouth.”

One main-lake area produced almost all of Johnston’s weight the first two days and on Championship Sunday, it reloaded with more quality smallmouth.

“It was just a flat, it wasn’t like chunky rock, but it was a subtle point,” he said. “They weren’t grouped in one spot. They were just roaming it. They are out in deeper water and for whatever reason, they move up shallow on that flat point and hang out. Around midday, they go in the middle of the lake and chase bait if I had to guess.”

Johnston secured a limit before 9:30 a.m. and landed a 4-pounder just before 10:30. Unfortunately, he could not get another big bass to commit to his presentation.

“I caught them the way I wanted to catch them. I used Garmin LiveScope and drop shots, Ned rigs and a Carolina rig,” he said. “Some new ones moved up today and my first pass over them they were biting. My second pass I caught one or two more and then the gig was up.”

Japanese pro Taku Ito finished third with 67-13 — a total he amassed with bags of 17-4, 16-13, 15-6 and 18-6. Ito continued an impressive streak of making the Day 3 cut at each of the seven smallmouth tournaments he has competed in on the Elite Series. He has now made five of the seven final-day cuts in those events.

“I tried to find the big schools and every day I changed my spot,” Ito said. “I tried a new spot and found a big school. Easy to catch. Today the wind was strong and it was easy to catch a 4-pounder.”

Ito focused his efforts on main-lake areas that had big groups of smallmouth that were constantly swimming and used Japanese finesse techniques. His go-to bait was an Ecogear Jukusei Aqua Swim Shrimp rigged on a 1/0 Ryugi Talisman Hook and a 3/16-ounce Boreas ANO ST TG Sinker.

Rathdrum, Idaho, native Brandon Palaniuk leads the Progressive Insurance Bassmaster Angler of the Year race with 647 points entering the final event of the season next week. Tennessee pro Brandon Lester is second with 610 points, followed by Johnston with 601.

Wisconsin pro Jay Przekurat leads the Falcon Rods Bassmaster Rookie of the Year standings with 543 points, followed by Huff with 479 and Tennessee’s Jacob Foutz with 456.

The Mobridge Chamber of Commerce hosted the tournament.