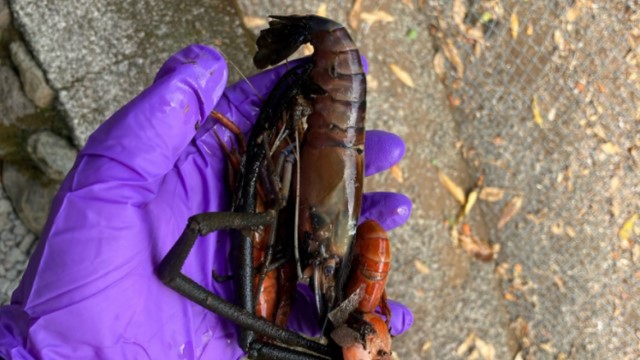 Hawaii’s Board of Land and Natural Resources (BLNR) just gifted 54-year-old Wayne Keaulana Spatz, of Hilo with a $633,840 fine. His crime: pouring poison into Pāheʻeheʻe Stream in North Hilo and killing an estimated 6,250 Tahitian prawns. This is the largest BLNR fine ever for an aquatic resource violation in the state.

BLNR and DLNR Chair Suzanne Case said, “The action today sends a strong and clear message to anyone else who is endangering people’s health and killing life in our streams. Over the past week we’ve received additional reports of individuals using chemicals used in pesticides to poison streams for the sole purpose of collecting prawns to sell for human consumption. It is illegal and morally indefensible, and anyone caught will be prosecuted to the fullest extent of the law.”

Over the course of the next two months Shishido doggedly pursued the case. Shishido also worked in collaboration with the DLNR Division of Aquatic Resources (DAR) to conduct a biological assessment of the stream, and the Hawai’i Department of Agriculture (HDOA) to collect water, soil and prawn samples to test for specific compounds linked to ant poison.

In addition to $100 fines for each of the 6,250 prawns Spatz took, he was fined $200 for unlawful use of poisonous substances. The fine also includes $8,640 for staff research and overtime for Officer Shishido, a DAR legal fellow and DAR biologist Troy Sakihara. Read the rest of the story here.