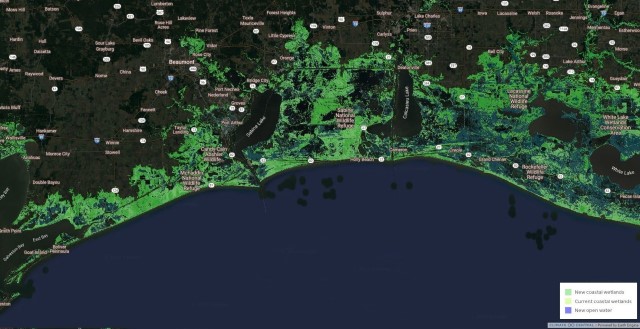 Climate Central today announced the publication of a new peer-reviewed study and interactive mapping tool showing American coastal wetlands’ resilience to climate change. The maps incorporate the study’s findings to reveal precise locations where wetlands might survive rising seas either by migrating upland or by growing higher to stay above rising water levels.

But the study, published in Environmental Research Communications, finds that rising seas threaten to drown most coastal wetlands by 2100—despite their unique abilities to adapt—unless planners preserve enough adjacent land to accommodate migration, and nations reduce greenhouse gas emissions to slow the pace of global warming and sea level rise.

The southern Atlantic and Gulf coasts face the highest risks of wetlands loss by the end of this century. The risks are most acute in Louisiana (home to one-third of America’s coastal wetlands), North Carolina, and Texas. Risks in California and Florida are magnified because their wetlands have limited undeveloped land to migrate to. Climate Central maps specifically identify where conservation efforts and climate action can reduce the loss of coastal wetlands, or in some cases allow them to expand, even as sea levels rise.

“Coastal wetlands are racing for survival against climate change. This research and the mapping tools it supports can help residents see where local and global actions can give their valuable wetlands the best chance of winning,” Benjamin Strauss, CEO and chief scientist of Climate Central said.

Coastal wetlands reduce flooding and the impacts of storms in residential areas, provide vital wildlife habitat, naturally filter pollution, and store carbon. Tim Dillingham, executive director of the American Littoral Society said, “Rising seas mean more wetlands are giving way to open water, and their important benefits are disappearing with them. But these are resilient, dynamic systems. They can grow higher and even move into new areas, and we must take action to support them.”