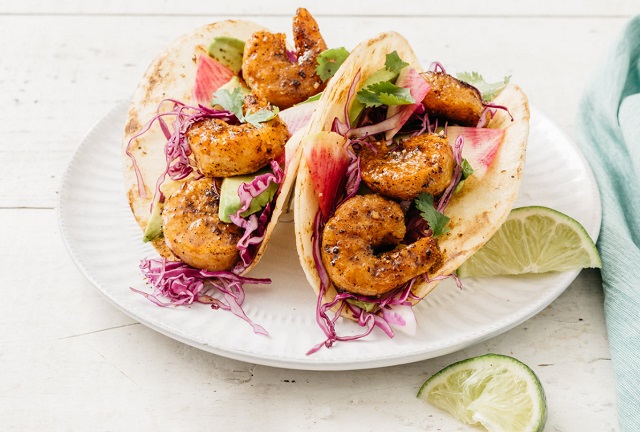 New Wave Foods is hitting the $9 billion dollar shrimp market with a plant-based shrimp made of sustainable seaweed and plant proteins. The Company will initially focus on selling its product to restaurants and food service locations.

They announced that they recently completed an$18 million Series A round of financing. Leading the investment round was New Enterprise Associates (“NEA”) along with Evolution VC Partners,as well as other new and existing investors. Tyson Ventures, the venture capital arm of Tyson Foods, Inc.,invested in the Company as previously announced in September 2019.

Liza Landsman, General Partner at NEA,will join the New Wave Foods Board of Directors. The Series A financing enables New Wave Foods to scale up production, aggressively expand its sales and marketing efforts,accelerate the Company’s plans for future products, and further build its strong team.

“Plant-based protein is one of the most important consumer trends in decades, with explosive demand for healthy, sustainable products, and New Wave Foods is delivering a plant-based seafood alternative that is delicious, responsible,and humane,” said Liza Landsman. “It’s an uncompromising, category-defining approach to a fast-growing market, and we are thrilled to partner with the New Wave Foods team on what promises to be a remarkable journey.”

Americans eat an estimated 1.5 billion pounds of shrimp annually, making shrimp the most consumed seafood in the U.S., with consumption intake equal to twice as much as salmon or tuna. Notably,80 percent of shrimp is consumed in food service.

New Wave Foods’ proprietary product is a result of years of close collaboration between top-tier chefs and renowned R&D experts. The result is a plant-based shrimp that is virtually indistinguishable from ocean shrimp in terms of taste and texture.

New Wave Foods is a disruptor in the seafood market with its 100 percent plant-based shellfish products. The Company’s mission is to protect the oceans by creating delicious plant-based versions of popular over-fished or ecologically destructive shellfish and by bringing them to consumers through a wide array of food service locations. The Company’s first offering, New Wave Shrimp, is interchangeable with ocean shrimp in any shrimp recipe and is made from seaweed and plant protein. New Wave Foods will soon share its passion for delicious, sustainable plant-based foods with food service operators and consumers by broadening its product offerings and expanding beyond its current geographic footprint. Company investors include New Enterprise Associates (NEA), Evolution VC Partners, Sand Hill Angels, and Tyson Ventures, the venture capital arm of Tyson Foods, Inc.