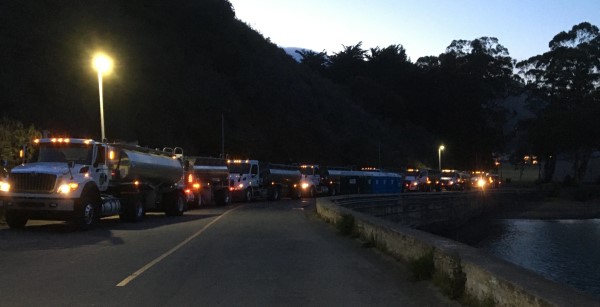 The California Department of Fish and Wildlife (CDFW) is getting ambitious when it comes to protecting its salmon population. With trucks.

I know, I know. Trucks don’t have a great track record in the water. But that’s fine. The CDFW doesn’t need them to go off-road. Rather, they’re trucking millions of hatchery-raised juvenile chinook salmon from the Central Valley to San Pablo Bay, San Francisco Bay and seaside net pens. This is because of projected poor river conditions in said valley. The massive trucking operation aims to ensure the highest level of survival for the young salmon on their hazardous journey to the Pacific Ocean.

Millions of young salmon will be transported, bypassing 50 to more than 100 miles of poor river conditions where estimated losses have been significant during dry years.

The massive trucking operation will transport around 20 percent more salmon around the Central Valley rivers and Delta than in typical water years. More than 16.8 million young salmon from four Central Valley hatcheries to sites around the San Pablo and San Francisco bays as well as Half Moon and Monterey bays. It will take approximately 146 individual truck loads traveling more than 30,000 miles between mid-April to early June to get all the fish out. The salmon will be trucked from the Feather River, Nimbus, Mokelumne and Merced salmon hatcheries.

The adaptive management strategy was triggered by CDFW biologists’ and salmon hatchery managers’ evaluation of current and projected river conditions, anticipating historically low flows and elevated temperatures. Part of the strategy involves selection of new release sites and rotating between release sites to minimize learned behaviors from predators. Releases will take place at night and during the day, utilizing both direct release and net pen acclimation techniques, to help maximize survival rates.

Ocean commercially and recreationally caught salmon generate more than $900 million in economic impact annually for California. Economic benefits from ocean caught salmon sold in markets to the purchase of fishing boats, fishing equipment, related travel and transportation by recreational anglers in pursue of these hatchery salmon make a significant contribution to California’s economy.